This small-batch cast iron apple crisp is the perfect crisp for anyone searching for a simple, satisfying treat that they can make and enjoy within 45 minutes. This vegan apple crisp adds blueberries and lemon for a full flavored tasty dessert.

Being from the North, I am an apple addict. The number of apples I have consumed in my life- oh my gosh. I grew up near Apple Orchards, apple picked often and made just about any type of apple dish you could think of.

However, as a lazy vegan, I do not have any desire to make a vegan crisp that will take me hours or make me hunt down weird ingredients.

I also want to add some pizazz to it, because why limit this crisp just to apples.

So, I decided to take traditional vegan apple crisp, add some lemons and blueberries to it, then bake it up in a cast-iron skillet. The results were phenomenal.

The sweet apple flavors harmonize with the fresh blueberries and zesty lemon. All topped with a maple brown sugar crisp.

Why Make This Apple Crisp In a Cast Iron Skillet

Easy & Quick - this recipe is simple to make, taking 30 minutes to bake and approximately 15 minutes to make. There are minimum steps, which are mainly mixing ingredients.

Full of Flavor -  Unlike normal apple or blueberry crisp, this crisp combines three delicious flavors - blueberry, apples, and lemon. The delicious blueberries burst with flavor and pairs well with the zesty lemon and warm apple taste.

Crowd Pleaser- Everyone loves a cast iron dish. Okay, maybe not everyone, but most people. I do not know if I ever heard someone say they did not enjoy their cast iron fajitas or cookie skillet.

Sturdy - A cast iron dish is so sturdy, making it an easy way to transport your crisp to picnics, parties, or holiday gatherings.

Why Make It A Mini Skillet Apple Crisp

How many times have you baked something and half of it ends up going bad before you are able to enjoy it?

This cast iron apple crisp is perfect for two people to enjoy, or just one very hungry person.

If you are planning to make this recipe for more than two people, you can easily double it.

Less Spices - If you only have cinnamon and not nutmeg and allspice, sub cinnamon for all three.

Gluten Free - What about the flour? You may sub 1-1 gluten-free flour to make this a gluten-free blueberry crisp. I have not tried this.

Butter- If you need to sub vegan butter, use another high-fat alternative, such as coconut oil.

If you swap for something that does not have a higher fat content, the crisp topping will not crisp up as well.

Nut Free- Walnuts are used in this recipe. If you want it to be nut free, use sunflower seeds or omit nuts entirely.

You will also need a cast iron. I used this cast iron from amazon.

This mini skillet apple crisp recipe is so simple to make. The most laborious part is peeling and removing the core.

If you want to cut down about 3-5 minutes from this recipe, buy pre-peeled apple slices. Then, you will just need to cut them into tiny bit size pieces.

Once you are done peeling the apples you will then need to cut them into bite-size pieces. Think the size of a blueberry. I have placed an example above for your reference.

It is okay if they are not all the same uniform size. If you cut them too large, however, you will have issues with bitting them.

One thing to note is not to cut them too thin. This will result in them cooking quickly and breaking down a little too much.

Next, place the cut apples into a medium-size mixing bowl. Gently mix in the blueberries, lemon juice, and zest, maple syrup, corn starch and spices.

The mix will be well coated.

Note, the size of your cast iron will affect the baking time. If you have a normal size cast iron for this recipe, you may need to cook it for longer.

Simply sprinkle the topping on top of the filling.

Pop in the oven and bake!

How To Store This Vegan Apple Crisp

Like most things, this crisp is best served immediately.

If for any reason you want to pre-make it for an event, I would suggest making the raw topping and the raw filling and keeping them in containers in the fridge until you are ready to bake the skillet apple crisp.

If you do this, be sure to remove the topping from the fridge for 30 minutes before using it to allow the butter to become room temperature.

If you do need to store the made skillet crisp, simply place it in an air-tight container in the fridge for up to 3 days.

When reheating the crisp, place it back into the cast iron and heat for 15 minutes at 350 F degrees.

What are the best apples to use for Apple Crisp ?

I used Gala Apples to make this recipe. Gala apples will turn soft from baking quickly and also break down nicely so they are easy and soft to eat.  You may use another soft apple as well, such as fuji.

Well, you may be thinking, I love Granny Smith apples, why can't I use those?

Trust me, I love them too. Granny smiths can take a very, very long time to bake. That is not saying you cannot use a granny smith apple, but if you do, I suggest you pre-cook the apples to break them down more in the skillet beforehand.

Should I use Fresh or Frozen Blueberries?

I used fresh blueberries, and I have not tested this recipe with frozen blueberries.

If you do use frozen blueberries, I would recommend that you bring them to room temperature then remove any excess water. Too much water will cause this crisp to be soggy.

Can I make this mini skillet apple crisp GF?

Yes, you can swap out gluten-free flour at a 1-1 basis.

How can I adjust this recipe for a 12 inch cast iron skillet?

Simply times the recipe by 2. There is an option to do this on my recipe card below (see the 2x below the picture above the recipe).

If you have a 10 inch cast iron skillet, you can also double the recipe, but cook times may vary.

What specific apple should I use for this skillet apple crisp?

I suggest you use gala apples for this recipe, as they are soft and cook easier. You may also use another soft apple, such as fuji.

Try these vegan apple fritters, which take approx. 30 minutes to prep and bake, and are bursting with cinnamon sugar flavor.

Another easy to way to use up your apples is with this instant post apple sauce.

My apple hand pies are another perfect small batch recipe that is full of flavor warm apple flavor.

No meal is complete without a delicious drink, am I right? This apple pie margarita will make your taste buds sing. 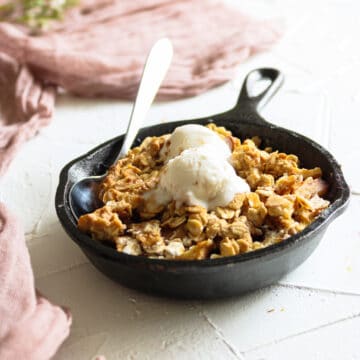 Chelsea Peachtree
This small-batch cast iron apple crisp is the perfect crisp for anyone searching for a simple, satisfying treat that they can make and enjoy within 45 minutes. This vegan apple crisp adds blueberries and lemon for a full flavored tasty dessert. *This recipe is for small skillets (5 inches) - be sure to double it if you have a large one*
5 from 1 vote
Print Recipe Pin Recipe
Prep Time 15 mins
Cook Time 30 mins
Total Time 45 mins
Course Dessert
Cuisine American
Servings 2
Calories 240 kcal

If you are using a cast iron that is over 5 inches, double the recipe.   Use soft apples, as they cook quicker. Gala is preferred, but fuji will work too.   Use fresh blueberries. If you do not have fresh blueberries, allow your frozen blueberries to thaw and then remove any excess water.   Be sure to cut your apples into bite sizes pieces so they are the same size of the blueberries.

Hi, I'm Chelsea! I am the recipe developer, content creator, photographer, and soul behind this blog. I eliminated meat from my diet at the age of 5 and have been cooking my own meals since. Here, I share with you some of my favorites in hopes you will see it is easy to ditch the meat!

We use cookies on our website to give you the most relevant experience by remembering your preferences and repeat visits. By clicking “Accept”, you consent to the use of ALL the cookies.
Cookie settingsACCEPT
Manage consent

This website uses cookies to improve your experience while you navigate through the website. Out of these, the cookies that are categorized as necessary are stored on your browser as they are essential for the working of basic functionalities of the website. We also use third-party cookies that help us analyze and understand how you use this website. These cookies will be stored in your browser only with your consent. You also have the option to opt-out of these cookies. But opting out of some of these cookies may affect your browsing experience.
Necessary Always Enabled
Necessary cookies are absolutely essential for the website to function properly. These cookies ensure basic functionalities and security features of the website, anonymously.
Functional
Functional cookies help to perform certain functionalities like sharing the content of the website on social media platforms, collect feedbacks, and other third-party features.
Performance
Performance cookies are used to understand and analyze the key performance indexes of the website which helps in delivering a better user experience for the visitors.
Analytics
Analytical cookies are used to understand how visitors interact with the website. These cookies help provide information on metrics the number of visitors, bounce rate, traffic source, etc.
Advertisement
Advertisement cookies are used to provide visitors with relevant ads and marketing campaigns. These cookies track visitors across websites and collect information to provide customized ads.
Others
Other uncategorized cookies are those that are being analyzed and have not been classified into a category as yet.
SAVE & ACCEPT