These decadent vegan pumpkin brownies have a fudgy brownie layer topped with pumpkin cheesecake. Just as good as regular brownies, but they are vegan and dairy free. They are the best vegan brownies ever! A perfect dessert for the holidays, or even when it's not pumpkin season!

I love that this vegan pumpkin brownie recipe contains simple ingredients that are easy to find at the grocery store.

Pumpkin puree -  Any kind will work. I used Libby’s pumpkin puree (the same thing you would use for pumpkin pie filling). You can make homemade pumpkin puree if you’re into that kind of thing, but in keeping with my lazy vegan recipe style, we’re using the canned version. It’s just as good and way easier.

Vegan cream cheese - Should be available in the vegan refrigerated section. I used Toffuti brand.

Brown sugar - Brown sugar is regular sugar combined with molasses. You can use light or dark brown sugar for this recipe.

Flour - All purpose flour is fine for this recipe. If you would like to make it gluten free, try a gluten-free flour like Bob's Red Mill 1-1 GF flour.

Cocoa powder - It is naturally vegan, so use your favorite brand.

Flaxseed meal - Regular brownies use eggs, but thankfully there are plenty of vegan egg substitutes, like aquafaba, Just Egg, or flax egg. For this recipe I used a “flax egg” which is ground flaxseed mixed with water.

How to make vegan pumpkin brownies

This vegan brownie recipe has two delicious layers: a fudgy brownie base with a pumpkin cheesecake layer on top.

Start by making the flax egg. Make your flax egg by combining 1 tablespoon of ground flax seed (flaxseed meal) with 2 ½ tablespoons of water. Let it sit for about 10 minutes. It will be gelatinous when done.

Combine brown sugar, white sugar, and softened butter in a large bowl and mix to combine. The mixture will be gritty and runny.

Next add in the flax egg and vanilla and continue mixing.

Add in dry ingredients over the wet ingredients next: flour, cocoa powder, baking powder, cinnamon, and salt. Continue mixing until the batter forms.

Fold in the vegan chocolate chips. Set this mixture aside while you make the pumpkin layer.

For the pumpkin batter, add pumpkin, cream cheese, brown sugar, and cinnamon to a medium bowl and whisk until smooth. You can use a hand mixer to make this easier! Set the mixture aside.

Grease a baking pan or casserole dish. You can also add a layer of parchment paper to make removal easier.

Bake brownies for 45-55 minutes, until a toothpick comes out clean. Allow brownies to cool slightly before removing them from the pan.

If you want extra chocolate, you can pour melted chocolate over the tops.

Save any leftovers in an airtight container in the refrigerator. Do not leave out at room temperature or the pumpkin cream cheese layer will melt

Can you freeze vegan brownies? Yep! You can freeze these brownies if you have any leftovers. Freeze them on a parchment lined baking sheet for a few hours so they don't stick to each other, then transfer them to a freezer bag. To defrost, let sit in the refrigerator overnight.

Why are my vegan brownies oily?

Sometimes vegan brownies made with oil (like vegetable oil or coconut oil) can make the resulting brownie greasy. I use vegan butter in this recipe which keeps the brownie moist and fudgy without being greasy.

What can replace eggs in brownies?

For egg substitutes in brownies, try apple sauce, a mashed banana or aquafaba. For this recipe I used a flax egg as an egg alternative.

Which chocolate is vegan?

For vegan baking chocolate, you can use the brand Enjoy Life which is usually easy to find at the grocery store. Dark chocolate is usually vegan naturally, but always check the labels. 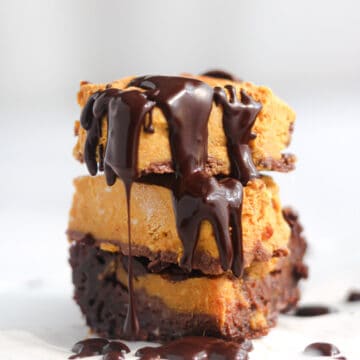 Chelsea Peachtree
These decadent vegan pumpkin brownies have a fudgy brownie layer topped with pumpkin cheesecake. Just as good as regular brownies, but they are vegan and dairy free. They are the best vegan brownies ever! A perfect dessert for the holidays, or even when it's not pumpkin season!
5 from 2 votes
Print Recipe Pin Recipe
Prep Time 20 mins
Cook Time 50 mins
Total Time 1 hr 10 mins
Course Dessert
Cuisine American
Servings 16 servings
Calories 152 kcal

Store in air tight container in fridge.  Do not leave out at room temperature or the pumpkin cream cheese layer will melt

Hi, I'm Chelsea! I am the recipe developer, content creator, photographer, and soul behind this blog. I eliminated meat from my diet at the age of 5 and have been cooking my own meals since. Here, I share with you some of my favorites in hopes you will see it is easy to ditch the meat!

We use cookies on our website to give you the most relevant experience by remembering your preferences and repeat visits. By clicking “Accept”, you consent to the use of ALL the cookies.
Cookie settingsACCEPT
Manage consent

This website uses cookies to improve your experience while you navigate through the website. Out of these, the cookies that are categorized as necessary are stored on your browser as they are essential for the working of basic functionalities of the website. We also use third-party cookies that help us analyze and understand how you use this website. These cookies will be stored in your browser only with your consent. You also have the option to opt-out of these cookies. But opting out of some of these cookies may affect your browsing experience.
Necessary Always Enabled
Necessary cookies are absolutely essential for the website to function properly. These cookies ensure basic functionalities and security features of the website, anonymously.
Functional
Functional cookies help to perform certain functionalities like sharing the content of the website on social media platforms, collect feedbacks, and other third-party features.
Performance
Performance cookies are used to understand and analyze the key performance indexes of the website which helps in delivering a better user experience for the visitors.
Analytics
Analytical cookies are used to understand how visitors interact with the website. These cookies help provide information on metrics the number of visitors, bounce rate, traffic source, etc.
Advertisement
Advertisement cookies are used to provide visitors with relevant ads and marketing campaigns. These cookies track visitors across websites and collect information to provide customized ads.
Others
Other uncategorized cookies are those that are being analyzed and have not been classified into a category as yet.
SAVE & ACCEPT